Sistan and Baluchestan Province is one of the 31 provinces of Iran. It is in the southeast of the country, bordering Pakistan and Afghanistan and its capital is Zahedan. The province is the largest province in Iran with an area of 181,785 km² and a population of 2.5 million. The counties of the province are Chabahar County, Qasr-e Qand County, Dalgan County, Hirmand County, Iranshahr County, Khash County, Konarak County, Nik Shahr County, Saravan County, Sarbaz County, Sib and Suran County, Zabol County, Mehrestan County, Zahedan County, Zehak County, Hamun County, Nimruz County, Bampur County, Mirjaveh County & Fanuj County.

The population comprises the Baloch who form a majority in the province, followed by the relatively large minority, the Sistani Persians. Smaller communities of Kurds (in the eastern highlands and near Iranshahr), the expatriate Brahui (on the borders between Iran and Pakistan), and other resident and itinerant ethnic groups such as the Gypsies are also found in the province.

In the epigraphs of Bistoon and Persepolis, Sistan is mentioned as one of the eastern territories of Darius the Great. The name Sistan, as mentioned above, is derived from Saka (also sometimes Saga, or Sagastan), a Central Asian tribe that had taken control over this area in the year 128 BCE. During the Arsacid Dynasty (248 BC to 224 CE), the province became the seat of Suren-Pahlav Clan. From the Sassanid period till the early Islamic period, Sistan flourished considerably. 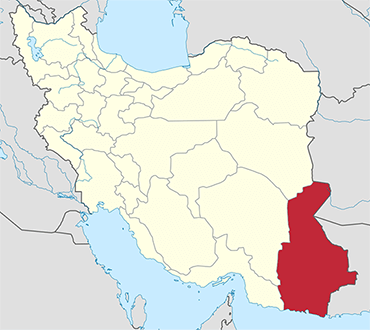 Zahedan5 Things to do, 1 Places to stay

Chabahar4 Things to do, 3 Places to stay